When we only have 1 kid, we would normally go out on weekends as J was scared that K would be suaku. We would normally let K ride the kiddy rides if they are available, but would not put money in, instead trying to educate her (uselessly) that putting money in is not worth it.

I would always feel sad when K looked longingly at other kids on moving (paid) kiddy rides. She would sometimes scamper to board the kiddy ride after the other kid had left, and asked me how come there was no more electricity (as the ride no longer moved).

Later on, I decided to do the following:

Later on, when K wants to ride kiddy rides, she will decide how much she wants to put in. E.g. she has $3. Does she wants to put money into the kiddy ride, or does she want to conserve money to buy tidbits at NTUC.
Once K wanted to put money into a machine that she can turn a knob to dispense a toy. Although we tell her that she likely won't get the toy she wanted as the machine was filled with random toys, she didn't want to listen. She wanted to use her money (she had saved up like $10+). After a few tries (each try was $2), she understood that it was not worth it, and didn't want to put in more money.
I feel that giving her her own money helped to teach her the value of money. No longer does she look longingly at kids on kiddy rides (She has the power to choose if she wants to put in $). She now sometimes educates her friends not to spend money at the vending machine too (buy at NTUC is cheaper!).
By H at 7/13/2021 09:15:00 am No comments:

Reply to comment on securing my family's financial security

Comment: Sad to say, 25X only works for the US or Canadian retiree and the Trinity study has a few conditions that are dangerous to extrapolate to Singapore's context without adaptation. 33X is probably a better figure to aim for.

I agree that the Trinity study is dangerous to extrapolate without adaptions. Here are some of my adaptions:

* I was typing the reply in the comment box and due to the length of the reply, decided I should put it in a post.

Email ThisBlogThis!Share to TwitterShare to FacebookShare to Pinterest
Labels: retirement

I was looking at https://www.my15hourworkweek.com/2021/04/13/the-six-steps-of-the-wealth-ladder/ (again), and thinking that I have probably secured my family's financial security. The family's net worth have reached a point (currently about 10x annual expenses) where I think we will be able to maintain our current lifestyle (till the kids start working, and by then CPF Life will soon kick in) even if I got retrenched and forced to take a lower paying job.

This is a post that I constantly re-read to motivate/remind myself.

I am highlighting the most important paragraph to me here.

The trinity study assumes a retiree will:

It tells me that 25x annual expenses is very safe to retire on. Let's hope I will really dare to retire then!
*I have reached FRS for my CPF and working towards FRS for J. Upon the age of 55 (16 and 19 years away), I fully intend to top up both CPF to ERS such that we can each have a draw down of $2k (in today's money) when we hit 55. 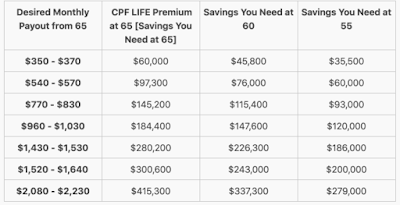 Why do you turn to FIRE? Why are you saving for retirement? Most people I know, don't seem to want to plan/save for retirement yet?

I was thinking what was my turning point? It was probably started due to me having a tumor in 2013. I had surgeries, and have since mostly recovered. Before the tumor, I was quite a workaholic. I vividly remembered a conversation I had with my brother who was working with me in my previous company (He was in another department. We both have since left.). I was having lunch with him (forgot where, parents or workplace?) when I was asking him some work related stuff. He answered my questions disinterestedly. When he realized that I had more questions, he commented that he didn't want to talk about work during his meal time.

Now, my priorities have changed. I realized that if I suddenly pass away, I will have regrets.

On his/her death beds, no one will regret that he should have worked longer hours, take lesser breaks etc. Your colleagues, friends even will probably be sad for a while, but your family will be sad or even suffer for a long time.

I know one of the things I will regret is not spending time with my parents. Now, I try to see them twice a week, and chit chat about things, memories, instead of fiddling with my handphone. Don't wait till they are no longer around.

I started tracking the family's net worth in 2016. Just now, I was wondering about the growth rate over the years.

The growth rate will probably get slower as my income will be contributing lesser and lesser as the family's net worth increase.

Do you guys believe that babies born in the earlier months have it easier? I do. This article largely explains why.

Email ThisBlogThis!Share to TwitterShare to FacebookShare to Pinterest
Labels: kids

Since my teeth straightening is a long journey, I decided to catalog the posts better. I changed a date thing in my second post, so its published date updated too.
From now on, I will include the total day number on the post title and individual aligner day count in the contents. I'm quite confused about my days counting actually because I am supposed to change it at night before I sleep. But I suppose in the grand scheme of journey, +/- 1 day for each aligner will not matter much, as long as my teeth move into the correct position before I change to the next set.
Set 2
The experience of first putting on the second set was not was dramatic as the first set. There was a tight feeling, which did not hurt as much. By the 5th or 6th day, it was hardly noticeable.
But I uncovered how bad my teeth clenching was. My teeth were sore throughout the day. I had to consciously shift my bite to the front teeth. It was a bad decision. There was a night when I had bitten tightly throughout my sleep and my front teeth hurt very badly for the whole of next day.
I visited the orthodontist on day 30. Her advice for teeth clenching was to massage the jaw muscles to release the tension and if possible, open my jaws slightly so I wouldn't feel the urge to clench. On the same visit, she put attachments on 20 out of the 28 teeth that I have, with one tooth having two attachments. The attachments are tiny triangular stones glued to the teeth to grip the aligners tighter. This was part of the programme, so the aligners have the corresponding dents on them as well. I was given sets 3 to 6.
I left the clinic without aligners in the mouth. The orthodontist wanted the first wear to be at least 8 hours. Hence, I will need to have dinner before I could wear my set 3. The attachments scratched my inner lips quite badly and I thought that the abrasion would leave me with ulcers.
Set 3 (day 4)
Set 3 was much tighter than the first two sets. I was given a handy hook to remove my aligners. After experimenting in the first two days, I concluded that the hook works better on the inner side than the outer side of teeth. The angle just made more sense.
By day 3, the tightness feeling was almost unnoticeable. Yay to shifted teeth!
And today, I realised that the abrasion from the attachments was healed. I did not have to eat as carefully and painfully as the first two days. Phew~
By J at 7/06/2021 02:36:00 pm No comments:

Hi. This is the year 2021 and we are a married couple in our late 30s. We have 3 kids, all in childcare currently. Home is a 5 room resale HDB in Singapore.

The husband (H) is the main breadwinner and works in IT.
The wife (J) is a mainly stay-at-home-mother.

We started this blog to record our journey as a family, and hopefully towards financial independence.
First blog post!
The turning point.

We do not really keep track of our family expenses, although we should.

Assuming an annual family expense of $X (with a 4% withdrawal rate), the current goal is $25X. If $25X is achieved, that simply means the husband can quit his job anytime (but doesn't mean he will). This 25X does not includes CPF, as CPF is considered a buffer.